Composer of the Year 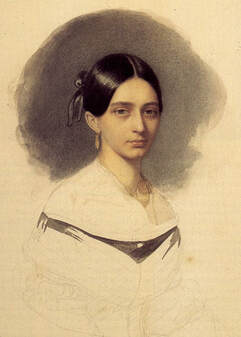 “Composing gives me great pleasure…there is nothing that surpasses the joy of creation, if only because through it one wins hours of self-forgetfulness, when one lives in a world of sound.” ~ Clara Wieck Schumann
​
​It was Clara Wieck’s destiny that she would fall in love and eventually marry one of her father’s pupils, Robert Schumann, nine years her senior. The couple’s courtship and her father Friedrich Wieck’s adamant opposition to the marriage is well documented. The latter took them to court in Leipzig to prevent the marriage but they nevertheless married on Clara’s 21st birthday.
​
​Clara had begun to compose from the age of 11 when her opus 1 (Four Polonaises) was published in Leipzig. Most of the early works are for piano, including a Piano Concerto, op. 7. During her teenage years, she and Robert inspired each other and in 1839 they produced similarly titled piano pieces—Clara’s Three Romances, Op. 11 and Robert’s Three Romances, Op. 28.

Clara Wieck’s piano compositions from 1835-39 include:

Clara Wieck made her debut as a child prodigy at age 11 in her  home city of Leipzig and by the time of her marriage, she was already acclaimed as a pianist throughout Europe. Honors included membership in Vienna’s Gesellschaft der Musikfreunde and appointment as Kammervirtuosin to the Austrian court. Her admirers included Goethe, Chopin, Berlioz, Mendelssohn, and Liszt who declared, “her talent delighted me; she had perfect mastery of technique, depth, and sincerity of feeling.”

The Schumanns had eight children with Clara continuing to travel and concertize, often championing her husband’s music in her programs. But having a large family and a husband “living in the realm of imagination”, as Robert himself noted, there was little time for Clara to recapture the ‘self-forgetfulness’ of music composition. Indeed as the affliction of mental illness took its toll on Robert’s health leading to his death in an asylum in 1856, Clara’s last creative output as a composer were the opus nos. 20 to 23, all dating from 1853.

Clara died of a heart attack aged 76, assured in her legacy as a composer, great pianist, and muse. The 200th anniversary of her birth will fall on Sept 13, 2019.

Read the extensive article about her in the Aug./Sept. issue of American Music Teacher.